An international study has found that the Chinese people originated not from Peking Man in northern China, but from early humans in East Africa who moved through South Asia to China some 100,000 years ago, Hong Kongs Ming Pao daily reported yesterday in a finding that confirms the single origin theory in anthropology.

According to the newspaper, a research team led by Jin Li (of Fudan University in Shanghai has found that modern humans evolved from a single origin, not multiple origins as some experts believe.

In China, school textbooks teach that the Chinese race evolved from Peking Man, based on a theory that humans in Europe and Asia evolved from local species.

But Jin and his fellow researchers found that early humans belonged to different species, of which only the East African species developed into modern humans.

This new finding nullifies the theory that the ancestors of the Chinese people were Peking Man who lived in northern China 400,000 years ago.

Based on DNA analyses of 100,000 samples gathered from around the world, a number of human families evolved in East Africa some 150,000 years ago, said Li Hui, a member of Jins team.

About 100,000 years ago, some of those humans began to leave Africa, with some people moving to China via South and Southeast Asia, Li said.

According to the newspaper article, it has been proven that the 65 branches of the Chinese race share similar DNA mutations with the peoples of East and Southeast Asia.

It said that the Shanghai scientists were part of an international team comprised of researchers from Russia, India, Brazil and other nations in a five-year project studying the geographic and genealogical routes related to the spread and settlement of modern humans.


In honor of the Little Black People

Drinking, singing and dancing are expected to take place deep in the mountains of Miaoli and Hsinchu when the "Ritual of the Little Black People" is performed by the Saisiyat tribe once again this weekend.

For the past 100 years or so, the Saisiyat tribe has performed the songs and rites of the festival to bring good harvests, ward off bad luck and keep alive the spirit of a race of people who are said to have preceded all others in Taiwan.

In fact, the short, black men the festival celebrates are one of the most ancient types of modern humans on this planet and their kin still survive in Asia today. They are said to be diminutive Africoids and are variously called Pygmies, Negritos and Aeta. They are found in the Philippines, northern Malaysia, Thailand, Sumatra in Indonesia and other places.

Chinese historians called them "black dwarfs" in the Three Kingdoms period (AD 220 to AD 280) and they were still to be found in China during the Qing dynasty (1644 to 1911). In Taiwan they were called the "Little Black People" and, apart from being diminutive, they were also said to be broad-nosed and dark-skinned with curly hair.
Full Article... 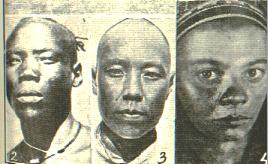 Chinese come from Africa, just like the rest of us

There Was An African Presence In Japan During Nichiren Daishonin's Time

"In the earliest Chinese history, several texts in classic books spoke of these diminutive blacks; thus the Tcheu-Li composed under the dynasty of Tcheu (1122-249 B. C.) gives a description of the inhabitants with black and oily skin...

The Prince Liu-Nan, who died in 122 B.C.,speaks of a kingdom of diminutive blacks in the southwest of China."

"In the first epochs of Chinese history, the Negrito type peopled all the south of the country and even in the island of Hai-Nan, as we have attempted to prove in our study on the Negritos, on Black men of this island.

Chinese folklore speaks often of these Negroes, and mentions an Empress of China named Li (373-397A.D.), consort of the Emperor Hsiao Wn Wen, who is spoken of as being a Negro."

Professor Chang Hsing-Lang revealed in an article entitled, "The importation of Negro Slaves to China under the Tang Dynasty A.D. 618-907," that:

Even the sacred Manchu dynasty shows this Negro strain.. The lower part of the face of the Emperor Pu-yi of Manchukuo, direct descendant of the Manchu rulers of China, is most distinctly Negroid. "Chinese chroniclers report that a Negro Empire existed in the South of China at the dawn of that country's history."

"A people without the knowledge of their past history, origin and culture is like a tree without its roots", said our "most valuable Black Man" of the early 20th century, Marcus Garvey {as far as I am concerned!}. If we don't wake up to face the artificial complexities of this fabricated world, to become ourselves, we will thenceforth remain a people just copying other people's identities, cultures and "knowledge" and will remain at war with and within ourselves. I personally wish to thank the author, Cheikh Anta Diop, for producing such brilliant and honest literature. Review

There is evidence of substantial populations of Blacks in early China. Archaeological studies have located a black substraum in the earliest periods of Chinese history, "and reports of major kingdom ruled by Blacks are frequently in Chinese documents."

Early migrations out of Africa:

People first migrated from East Africa around the regions of Ethiopia and Somalia to Yemen, Oman, Southern India, Burma, China, Malaysia, The Philippines, Indonesia, Papua New Guinea, Australia, The Solomon Islands and all the little islands in between.

The migrations and trade westward by sea started declining only about 11,000 years ago when the world sea level rose, recovering from the last deep marine regression caused by global cooling and the locking-up of water in continental glaciers.

Those who traveled over land mixed with other Africans who went through physiological changes as they traveled at earlier periods. Those who made the journey by sea, in one trip, entered foreign lands with the original Black looks.

Examining the migrations through both land and sea routes will allow for a better understanding of the complex exchanges between groups of people who evolved and continued to evolve while migrating out of Africa. Some groups entered China with their original form and others evolved along the way and entered China looking different to their ancestral form.

All people on this earth are connected to the indigenous African people and the migrations of people today can be proven not only by examining the historical records but also through DNA studies.

WASHINGTON — Genetic studies that show the first modern human arrived in China about 60,000 years ago support the theory that people first evolved in Africa, researchers say.

In a study published Tuesday in the Proceedings of the National Academy of Sciences, scientists say that an analysis of genetic samples from throughout Asia suggests that people there sprang from common ancestors, the modern humans who appeared first in Africa and then spread throughout the world.

"Our work shows that modern humans first came to southeast Asia and then moved later to northern China," said Li Jin, a population geneticist at the University of Texas in Houston. "This supports the idea that modern humans originated in Africa."

Jin said the study is based on analysis of the gene patterns from 43 different ethnic groups in China and Asia. He said the technique gives an indication of how people moved and mixed over thousands of generations.

Migration clues are carried in genetic patterns, called microsatellites, that change rapidly over time. By analyzing these changes and linking them to earlier genetic patterns, researchers are able to plot the migration of ancient humans.

Based on the research, Jin said it appears that modern humans first moved from central Asia, following the Indian Ocean coastline across India, to southeast Asia. Later, they moved to south China. Descendants of these original Chinese then migrated north and northwest, populating northern China, Siberia and eventually the Americas.

"This is important research because it supports the out-of-Africa theory about the origin of modern humans," said Ranjan Deka, a population genetics researcher at the University of Cincinnati.

Deka said the results of the study weaken an alternative theory that modern humans arose independently on different continents at about the same time. If this were true, he said, there would be little or no genetic continuity among the various populations of the world.

Instead, said Deka, the findings by Jin and his colleagues show genetic continuity in China, even though that vast country has dozens of different ethnic populations and more than 200 different languages.

Jin said he believes modern human migration into Asia was probably affected by glaciers that invaded much of the Northern Hemisphere during an ice age that lasted thousands of years.

It may have been only after the glaciers retreated, more than 15,000 years ago, that modern humans were able to migrate to far northern Asia and across the Bering Strait to the Americas.

A three-story pyramid dating 5000 years back has been discovered in north China's Inner Mongolia Autonomous Region.

The pyramid, which looks like a trapezoidal hill from afar, is located on a hill one kilometer north of Sijiazi Town, Aohan County. The pyramid is about 30 meters long and 15 meters wide at its base.

This is considered the best-preserved pyramid built during the Hongshan Culture period that has been found so far, said Guo Dasun, an archaeologist in charge of the excavation.

Among the culture relics excavated from one of the seven tombs are a bone flute and a stone ring and a full- sized stone statue of Goddess unearthed from another tomb.

What astonished the archeologists is a one palm-sized stone genital found on the inner wall of a tomb with a small stone statue of Goddess below.

Guo Dasun said that most of these relics are found for the first time and will shed light on studying the origin of Chinese civilization. (Photos and other articles)

Although the island nation of Japan is assumed by many to have been historically composed of an essentially homogenous population, the accumulated evidence places the matter in a vastly different light. A Japanese proverb states that: "For a Samurai to be brave, he must have a bit of Black blood." Another recording of the proverb is: "Half the blood in one's veins must be Black to make a good Samurai." Sakanouye Tamura Maro, a Black man, became the first Shogun of Japan.

In China, an Africoid presence in visible from remote antiquity. The Shang, for example, China's first dynasts, are described as having "black and oily skin." The famous Chinese sage Lao-Tze was "black in complexion."